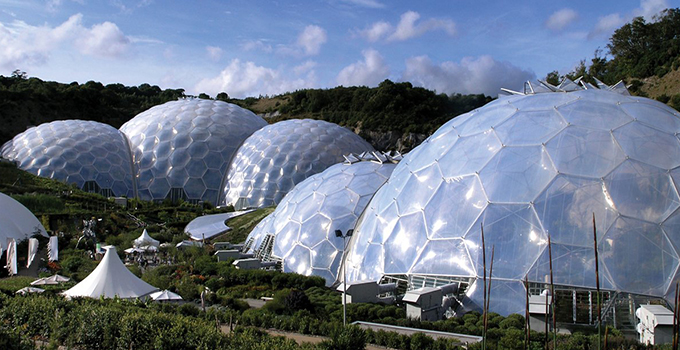 During your stay, visit The Eden Project at reduced prices

We can offer our guests staying here at Lower Marsh Farm discounted tickets for the Eden Project. This place is visually amazing and hugely interesting to people of all ages. There are sights and sounds for the youngest of babies through to sufficient detail for academics.

To give you a potted history, The Eden Project idea was founded in 1995 by Tim Smit.  The site was a working china clay pit which was nearing the end of its economic life near St Austell and Tim, who had already restored the Lost Gardens of Heligan, was looking for somewhere to showcase some of the world’s most fabulous and important plants.  Over the next few years the ideas became plans and enough funding was tirelessly secured, then construction got underway in October 1998.  By 2000 the biomes started to take shape and by August the team had made 83,000 tonnes of soil from environmental regeneration.  The first of the plants arrived in September as planting began in the rainforest biome which was twice as high as the Tower of London.

On 17th March 2001, the doors were officially open to the public for the first time, and by June over a million people had visited what had been daubed by the Times as ‘the eighth wonder of the world’.  In August 2002, the first of the Eden’s sessions was performed by Pulp, since then there have been many top acts performing at the one day festivals, including Elton John, Van Morrison, Kaiser Chiefs and Bryan Adams.

In January 2004 Eden started an international project to help school children create their own gardens, within seven years thousands of children had taken part from across 4 different continents.   In August of the same year the country’s first undercover ice rink opened at Eden, now over 100,000 people each year go there to skate.

Over the following years Eden benefited from a visit from the Queen, opened its cutting-edge education centre, installed a giant robot, became a wedding venue, had silver success at the RHS Chelsea Flower Show two years running and opened its own youth hostel accommodation.

The Eden Project has its focus on learning and providing new experiences for visitors, attractions include a Rainforest Biome and canopy walkway, a Mediterranean Biome, outdoor gardens, seasonal plant highlights, England’s longest zip wire, a Western Australia Garden, coffee shops and restaurants and discovery trails/play equipment for children, so there is most certainly something there for everyone!

If this has tempted you to a visit, we can offer you, as our guests, discounted tickets for the Eden Project. Just email us for details.

What is on the Salt Marsh and why is it an important habitat?