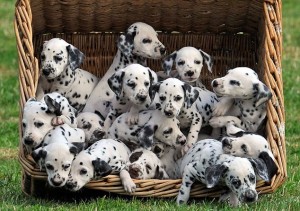 We all remember the fabulous film One Hundred and One Dalmatians don’t we? Well some of the puppies used in the 1996 film were bred here at Lower Marsh Farm.

The book was written by Dodie Smith in 1956 and was initially turned into an animated film in 1961.  Then in 1996 the live action Disney film was aired, costing $75 million to make but grossing $320.6 million in revenue.

In order to make the film there were actually 230 different puppies used because as pups do, they kept growing, so each litter could only be used for a period of 2 weeks before they got too big.  All the puppies came from private homes which were vetted, then when the pups were 6 weeks old the trainer would come and spend time with them at their homes and only go to the studio when they were 8 weeks old.  In all cases, the entire litter would be used, so as not to leave pups away from their siblings, and their owners would always be on site.  During the early 1990s the family then living at Lower Marsh Farm bred and trained Dalmatians.  One of their litters of puppies was actually chosen to appear in the film!  The outdoor kennels where these dogs were bred are now the residences for the Farm’s Aylesbury ducks!

The film tells the story of Roger and his Dalmatian Pongo, who meets and falls in love with Anita and her Dalmatian Perdita.  Anita’s boss Cruella de Vil has a passion for animal fur products, so when Perdita has a litter of 15 puppies Cruella hatches a plan to steal the puppies to make a Dalmatian fur coat.  She steals Perdita and Pongo’s pups, along with 84 others, making the total 99, however, Pongo enlists the help of his animal friends to help them find the pups and save them from the fate Cruella has planned for the poor little souls.  A cunning plot follows, which as you can imagine, has a happy ending for Roger and Anita, and all 101 Dalmatians!

Have a new baby? Holiday without taking the kitchen sink!