Saint Piran’s Day, the national day of people in Cornwall is on 5th March 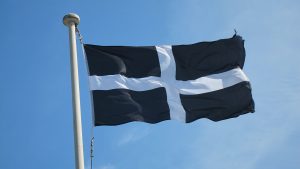 Saint Piran is the patron Saint of Cornwall.  According to legend, he was born and lived in Ireland in the 5th Century but travelled to Rome to study the scriptures.  He returned to Ireland where he was made a Bishop and reportedly performed many good deeds and miracles, such as raising soldiers from the dead who had been killed in battle.  However, a group of tribal kings were afraid of Piran’s popularity so they put a millstone around his neck and pushed him off a cliff into the sea below.

Legend then has it that he floated across the sea to Cornwall on the millstone, arriving at what is now called Perran Sands at Perranporth – named after St Piran.  He built a chapel there in the sand dunes and Cornish people flocked to see him after news about his teachings spread.  He also re-discovered tin when he saw a white liquid coming out of and forming a cross on a black rock he had as his hearth stone, and is known as the patron saint of tinners.  Saint Piran’s flag became the national banner of Cornwall, the white cross on a black background signifying the tin and the black rock.  It is reputed that Piran lived to the grand age of 206 years old!

Cornish people celebrate St Piran’s national day in many ways; there is a re-enactment on Perranporth beach, processions in Truro, Redruth and Falmouth, and many other activities going on across the county.

The Cornish are well known for their singing and hospitality, so one of the biggest celebrations takes place on the evening of 5th March each year, and this is a get together – or a ‘shout’ as it’s known – in the local pub where many Cornish songs are sung, with everybody singing the Cornish anthem ‘Trelawney’ at 9pm.  This will be happening at over 50 pubs across Cornwall, with the backing of St Austell Brewery.  The nearest pub where this shout will take place this year is again the Who’d of Thought It Inn at St Dominick, just a few miles away, starting at 8.00pm.  This certainly is a spectacle and with all those passionately Cornish voices it is a spine-tingling experience indeed!